Should you go for fixed-rate mortgages now that interest rates are rising?

“In the slipstream of US and German interest rates, 10-year interest rates in Switzerland have risen by almost 1 percent since the beginning of the year. High inflation in Europe and the USA, the rise in energy prices in recent months and increasingly nervous central banks have led to this sharp rise in interest rates.

The war in Ukraine and massively higher energy prices not only lead to high inflation in the short term, but also weigh on the economy, reducing longer-term inflationary pressures. This calls into question whether central banks will really react as aggressively as longer-term interest rates reflect today. If this is not the case, the sharp rise is an exaggeration and interest rates on Bunds and mortgages are likely to settle back at lower levels in the coming quarters.” 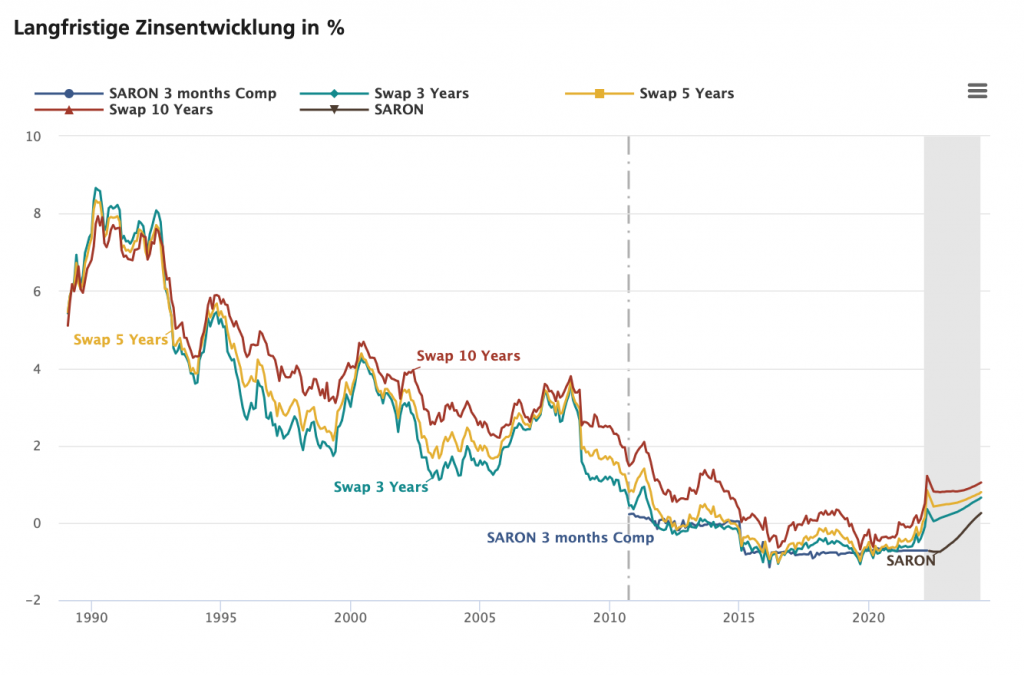 Sources: Bloomberg, UBS Switzerland AG; Values up to and including 2010 are based on Libor and from 2011 on SARON. The effective interest rate of the product is calculated from Margin + Compounded SARON of the respective settlement period. For the calculation of the interest rate, the Compounded SARON can never be less than zero.

In his article on the development of interest rates in Switzerland, David Marmet, chief economist of the ZKB, sees an end to the SNB’s negative interest rate policy. He wonders whether the war in Ukraine and the associated rising energy prices, the foreseeable end of the pandemic and a renewed increase in global demand will cause inflation to rise in Switzerland as well – and with it mortgage rates. With regard to the development of mortgage interest rates, he draws the following conclusion: “Since the participants in the financial markets expected significantly more than an interest rate increase from the SNB by the end of 2022, the yields of Swiss government bonds have also risen. This in turn led to rising mortgage rates. Will the rise continue unchecked? According to our estimates, the SNB will not raise key interest rates to the extent expected by financial market participants. However, the Swiss will not be able to completely escape the global yield momentum. This argues for slightly higher Swiss yields – and indirectly also for slightly higher mortgage rates. Thus, the turnaround in interest rates has been heralded, but the interest rate level will remain below the historical average for a very long time.”

In an article by Adrian Wenger, mortgage expert at VZ Vermögenszentrum, the author advises that it is now important to remain calm despite rising mortgage rates. It is true that the fact that interest rates for long-term fixed-rate mortgages have risen by up to one percentage point in recent months is alarming. He writes: “Fearing that they could rise further, many mortgage borrowers want to lock in the low interest rates as quickly as possible. From a sober point of view, this does not make sense. It is still worth choosing a short-term mortgage. Money market mortgages (Saron) are still much cheaper and more flexible.”

There are a number of reasons against switching immediately, he says, listing:

He only recommends switching when there is a clear change in the trend: “If you pay 0.85 per cent for your money market mortgage today, you will still pay 0.85 per cent even if the SNB raises interest rates by 0.75 percentage points to zero per cent. Only when the key interest rates, and thus the Saron, rise above this threshold does the mortgage rate also rise. If the key interest rates rise by a whole percentage point to plus 0.25 percent, the money market mortgage will now cost 1.1 percent (0.85 plus 0.25 percent). Even then, however, it is still much cheaper than a fixed-rate mortgage. Money market mortgages have practically always been cheaper than fixed-rate mortgages over the past 30 years.” 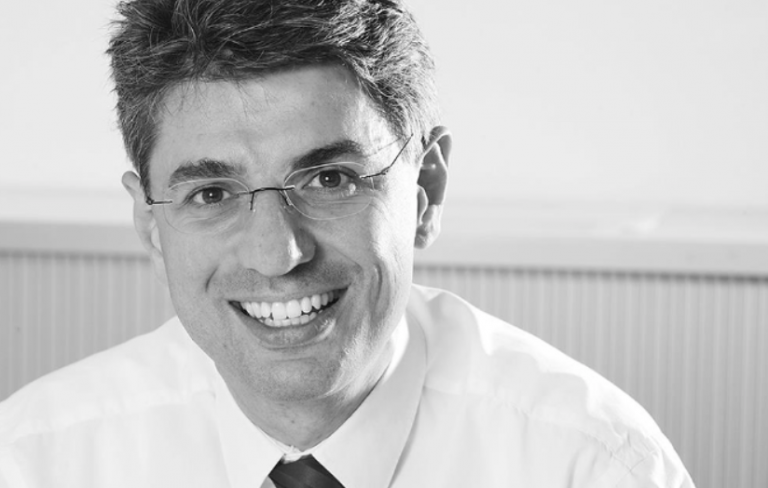 According to the IAZI, the corona pandemic has not yet caused any major price corrections in the Swiss real estate market. In particular, prices for private residential property appear to have continued to grow strongly last year (+2.4 % for single-family homes; +3.2 % for condominiums).

Wüst-und-Wüst magazine has asked Monika Ruf Hollenweger, a notary specialist at Wüst und Wüst Küsnacht for more than 15 years, why her company decided to have an internal notary specialist office and what advantages such a solution offers, especially for buyers and sellers of properties in the high-end segment. 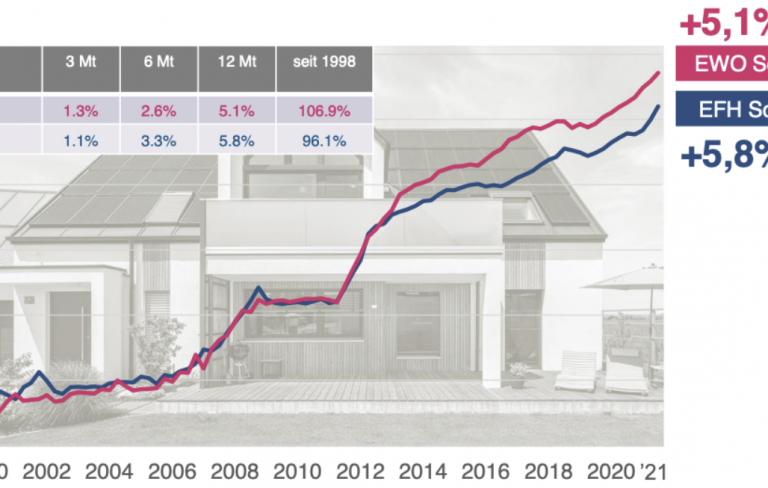 Rising home prices – bubble or not?

Prices for private residential property have again risen sharply this year. With these sharply rising prices, anyone who manages to buy one of the scarce owner-occupied homes can call themselves lucky. Homeowners can save hundreds of francs a month compared to renting, writes the real estate beard company IAZI in its current analysis.