On the occasion of the 150th anniversary of his birth, the Fondation Beyeler is dedicating a comprehensive exhibition to the Dutch painter Piet Mondrian (1872-1944) until 9 October 2022, with works from its own collection as well as important international loans. As one of the most important and versatile artists of the avant-garde, Mondrian had a decisive influence on the development of painting from figuration to abstraction. On the basis of 89 works, “Mondrian Evolution” traces the artist’s impressive transformation from a 19th-century landscape painter to one of the leading protagonists of modernism. The exhibition offers a rare opportunity to discover and get to know Mondrian in a new way. Mondrian had a significant influence not only on the art of the 20th century, but also on other areas such as design, architecture, fashion and pop culture. It is the first comprehensive solo exhibition of the artist in Switzerland in 50 years.

Mondrian Evolution shows the impressive transformation of the artist

While the collection of the Fondation Beyeler concentrates primarily on works from Mondrian’s later creative phases, the exhibition focuses on the development of Mondrian’s early work. His early works were influenced by Dutch landscape painting of the late 19th century, but Symbolism and Cubism were also of great importance to his artistic development. It was not until the early 1920s that Mondrian shifted to a completely non-objective pictorial language, which was limited to the rectangular arrangement of black lines with surfaces in white and the three primary colours blue, red and yellow. Mondrian’s abstract paintings are the results of a long process of artistic exploration in the field of tension between intuition and precision and constant, intensive self-questioning. He himself understood abstraction as a process of approaching an absolute truth and beauty to which he aspired as an artist. His stylistic versatility was the result of his constant search for the unity and essence of the image itself. He himself used the term “evolution” – but not in the sense of Charles Darwin. For Mondrian, “evolution” rather meant the gathering of experiences on which a new stage of artistic development was built, which in turn led to further insights. The exhibition is structured chronologically, but it thrives not least on the juxtaposition of early and late works, which highlight the changes in Mondrian’s oeuvre. In nine exhibition rooms, visitors encounter recurring motifs in the artist’s work, including windmills, dunes, the sea, farms reflected in the water and plants in various levels of abstraction. In his landscape paintings, Piet Mondrian experimented with the luminosity and radiance of colour, which makes these paintings appear distinctly bright and powerful, as well as with the influence of light and the experience of space, surface, structure and reflections. 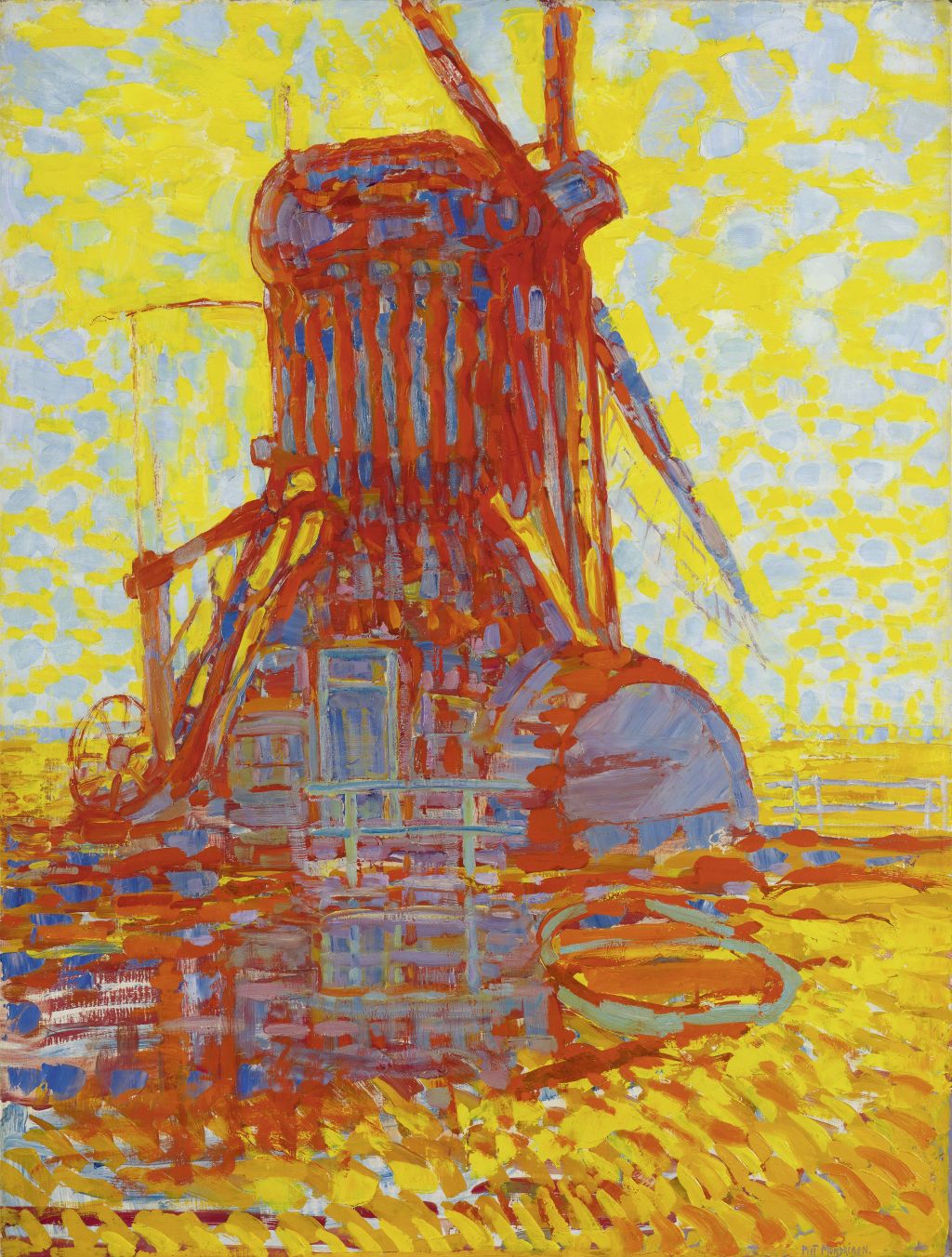 The painting Mühle bei Sonnenschein (Mill in the Sunshine) from 1908, which still has a radical effect today, caused an uproar among critics at the time of its creation because of its apparent explosion of colours and sketchy painting technique. The exhibition also presents the atmospheric work. 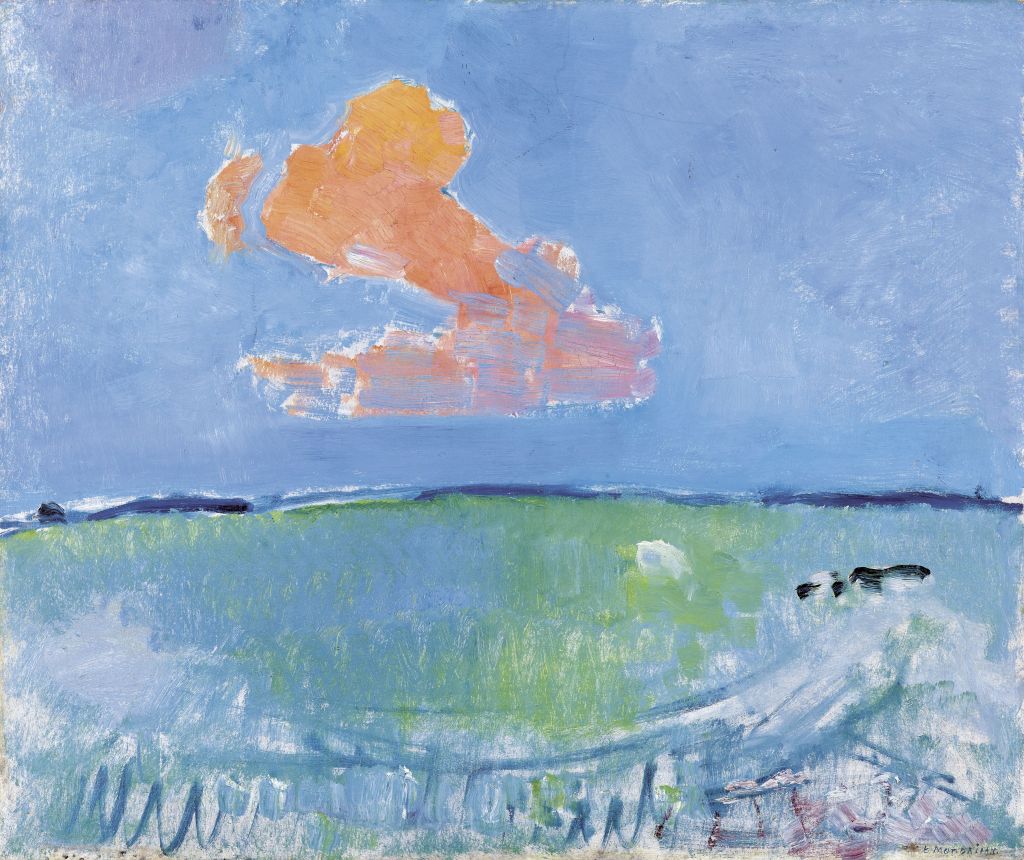 The Red Cloud from 1907, which captures the magical and fleeting moment when a cloud is coloured red by the low sun, while the landscape and the rest of the sky are still bright blue. The painting belongs to a group of works that Mondrian painted at dusk, when the colours and colour combinations change dramatically. In his drawn self-portraits of 1908, he also depicted himself at twilight, his pupils wide open and receptive to even the slightest nuances of colour produced by the light. 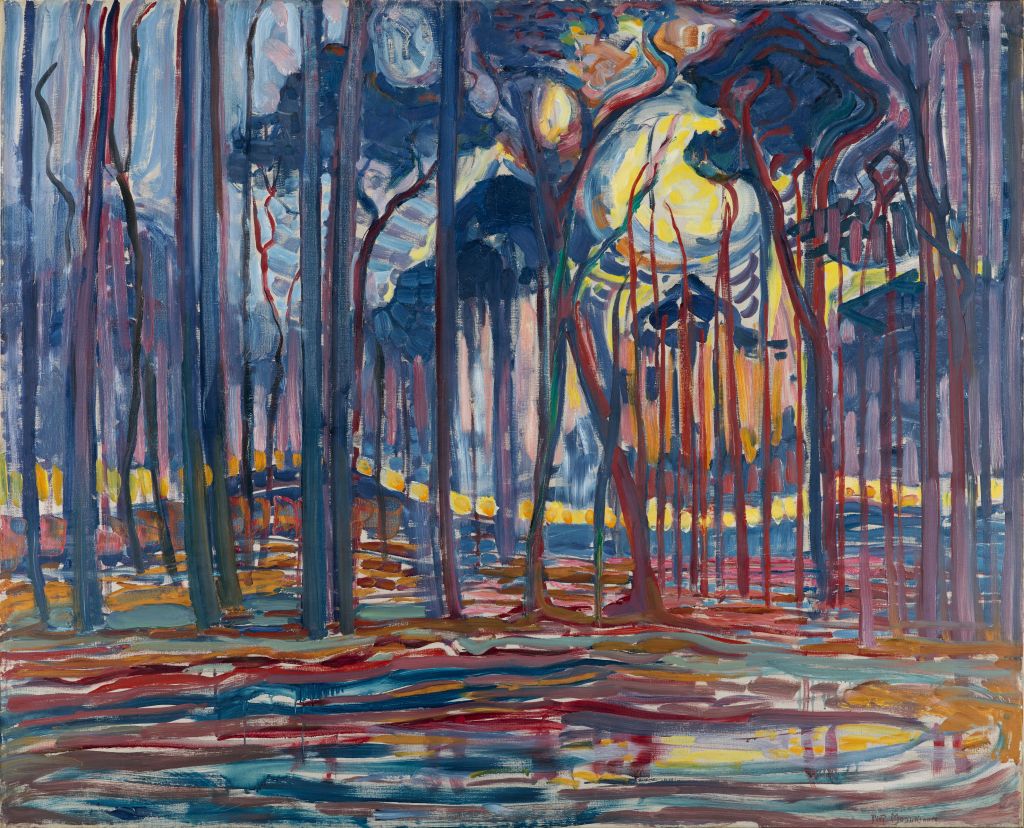 Mondrian’s large-format painting Forest at Oele from the Kunstmuseum Den Haag, also painted in 1908, shows a view towards the sun, which is above the horizon. The tree trunks, staggered one behind the other and appearing red or violet against the light, create the illusion of space.

After the colour explosions of 1907 to 1911, Mondrian, inspired by his encounter with Cubism in Paris, resorted to less radiant colours. Grey and ochre tones now determined the overall impression of the paintings, and the line as such became increasingly important. Mondrian continued his preoccupation with themes such as abstraction. The depiction of trees and their metamorphosis is particularly impressive and clearly shows his creative motives. 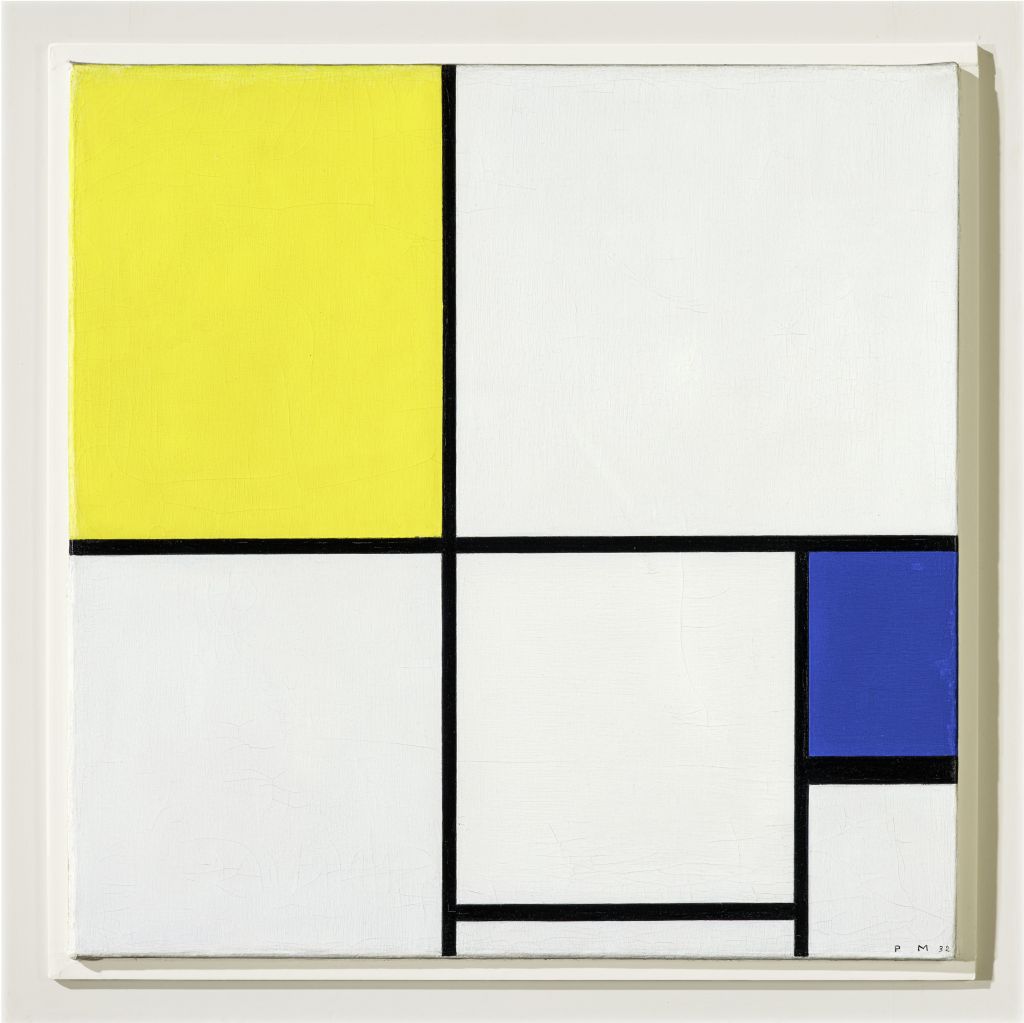 The experience of these paintings enabled Mondrian to leave representationalism completely behind. Composition No. IX from 1913, on loan from the Museum of Modern Art in New York, consists of a structure of interlocking forms, mostly characterised by right angles.

New York City 1 is the most recent work in the exhibition and belongs to a small group of paintings created around 1941. It shows a similar constellation to Wald bei Oele from 1908, except that the later composition has no reference whatsoever to a real landscape situation, but is “purely abstract”. The work is unfinished and an important testimony to Mondrian’s working methods in the last years of his life. In New York, the artist had begun to alter his pictorial ideas and to make them more dynamic and rhythmic with the help of strips of paper. The coloured areas were abandoned in favour of coloured lines.

Born into an artistic family

Born in Amersfoort in the Netherlands in 1872, Mondrian came into contact with art at an early age: his father was a drawing teacher, his uncle a successful amateur painter who was influenced by the Hague School of landscape painting, a specifically Dutch form of Impressionism. After a Calvinist upbringing and training as a drawing teacher, Mondrian studied at the Rijksakademie van Beeldende Kunsten in Amsterdam between 1892 and 1895. He continued to work as a drawing teacher, painting portraits on commission and making scientific drawings for Leiden University. Mondrian also pursued his artistic ambitions and developed his own style of painting. The influence of the Hague School can still be seen in most of his works from this period, which mainly depict windmills, rivers and farmhouses. From this, Mondrian purposefully expanded his artistic possibilities.

His art is closely related to his interest in philosophy and esotericism. From 1908 onwards, he began to study theosophy intensively; under the impression of Rudolf Steiner’s writings – at that time still a theosophist – he joined the Dutch branch of the Theosophical Society in 1909. His encounter with Cubism led to a first stay in Paris at the end of 1911, which lasted until 1914, when Mondrian was unable to return there due to the outbreak of the First World War. He then moved permanently to Paris in 1919.

After the First World War, many artists strove for a radical new cultural beginning. In the Netherlands, a group of like-minded avant-gardists formed and in 1917 the magazine De Stijl became their publication. Mondrian formulated the group’s claim to destroy traditions in order to reshape all aspects of life on the basis of the essential elements of art he propagated.

Mondrian attempted to discuss his artistic programme in theoretical writings. He called his new way of painting “Neue Gestaltung”, French “néoplasticisme”, a term that also became common in German as “Neoplastizismus”. Mondrian understood this primarily as a concentration on the essential means of expression in painting: on the one hand black and white, which are at opposite ends of the colour scale, and on the other the primary colours yellow, red and blue. Black is usually the lines that run vertically and horizontally and form a right angle when they meet. The possibilities of pictorial compositions, which can be The possibilities of creating a colour from the interplay of these factors are almost infinite. Mondrian was concerned with the essential image, the creation of a perfect balance that is nevertheless full of tension and in which all the elements seem to be in their right place.

Mondrian spent the last 25 years of his life in the three most important cultural metropolises of modernism: Paris, London and New York. From the end of 1911 to 1938 he lived in Paris, with an interruption due to the First World War. After a stopover in London, he moved to New York in 1940, where he died in 1944 at the age of 71. As a member of the Theosophical Society, Mondrian attached great importance to internationality. From the 1920s onwards, he was famous as an avant-gardist and co-founder of abstract painting. His respective studios became legendary places that were extraordinarily inspiring, especially for younger artists, including Willem de Kooning and Lee Krasner.

To complement the exhibition, the Fondation Beyeler is showing “Piet & Mondrian”, a short film by Lars Kraume, one of the most renowned German-language film directors. The starting point for the film is Mondrian’s 1919/20 essay in dialogue form Natural and Abstract Reality, in which he formulated his thoughts and ideas on abstraction in art. The well-known theatre and film actor Lars Eidinger brings Mondrian’s theoretical text to life. “Piet & Mondrian” was produced by Felix von Boehm / Lupa Film with funding from Medienboard Berlin-Brandenburg. The screenplay was written by Constantin Lieb. The Fondation

Beyeler is open daily from 10 am to 6 pm, on Wednesdays until 8 pm. 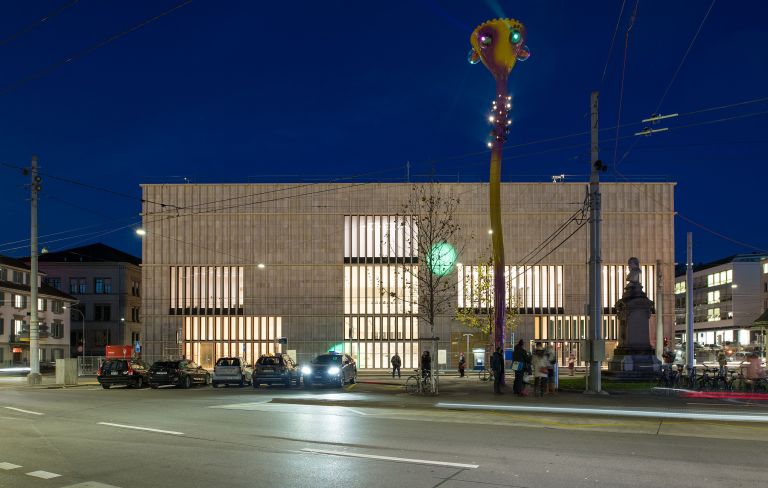 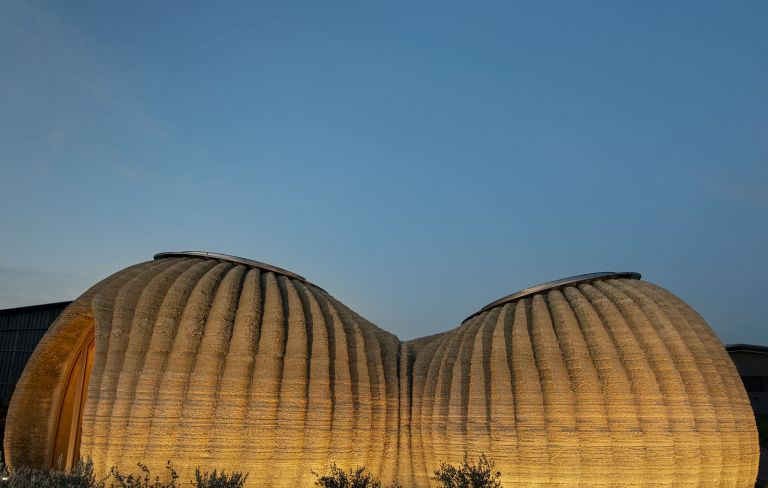 Is an Eco-Friendly Future 3D Printed?

How to build sustainable housing? This question is addressed in an article that recently appeared in the online magazine luxurydefined by Christie’s International Real Estate. According to them new technologies will provide better housing, faster, more affordably, and more sustainably. 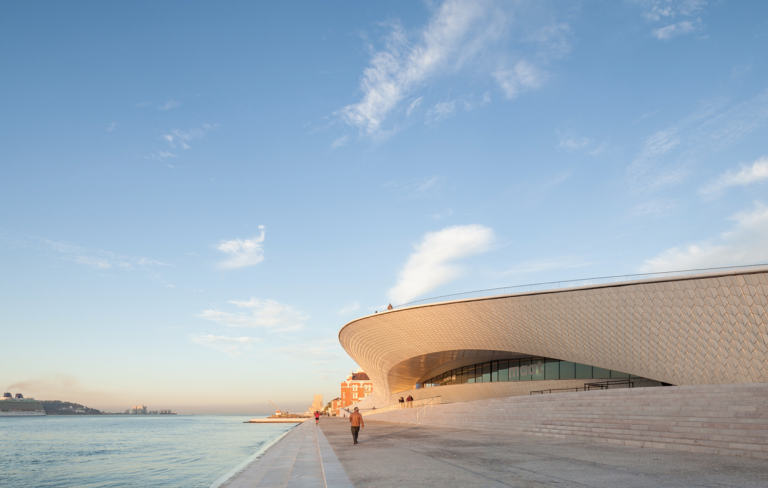 24 surprising places in Lisbon that you, as an architecture connoisseur, should take a look at.

When you think of Lisbon, you usually think of the picturesque old town with its winding streets and out-of-time trams, or you dream of fado and heavy wines. For friends of modern architecture, however, the city also holds some trouvailles that should not be missed during a visit to this fascinating city.