How will we live together? asks the Venice Architecture Biennale 2021.

This year’s 17th Venice Architecture Biennale promises an answer to the question of how we will live together in its title. The Wüst-und-Wüst-Magazin editorial team went to see whether it can provide this answer and returned home with mixed feelings. 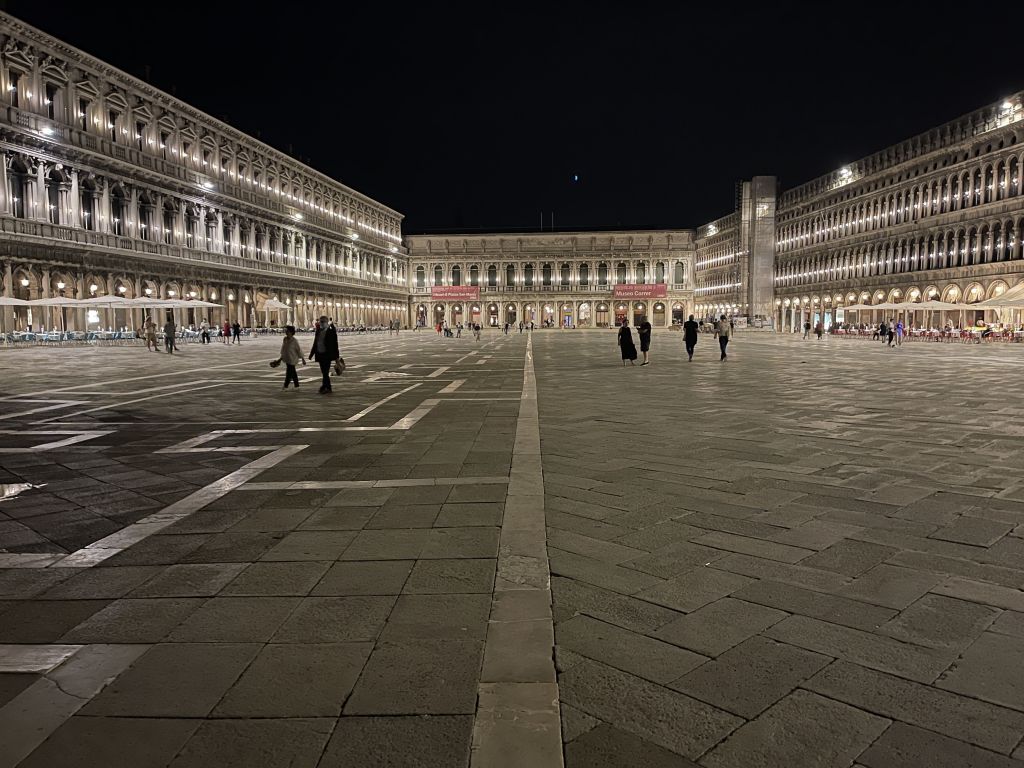 At the moment even the Piazza San Marco is almost deserted. Photo: Werner Mäder, Uetikon

Apart from a few really great installations at the biennale, we are left with the memory of a Venice still without streams of tourists, of a few summery days in the impressive old town and of the feeling of a reawakening normality.

What does the theme question stand for? 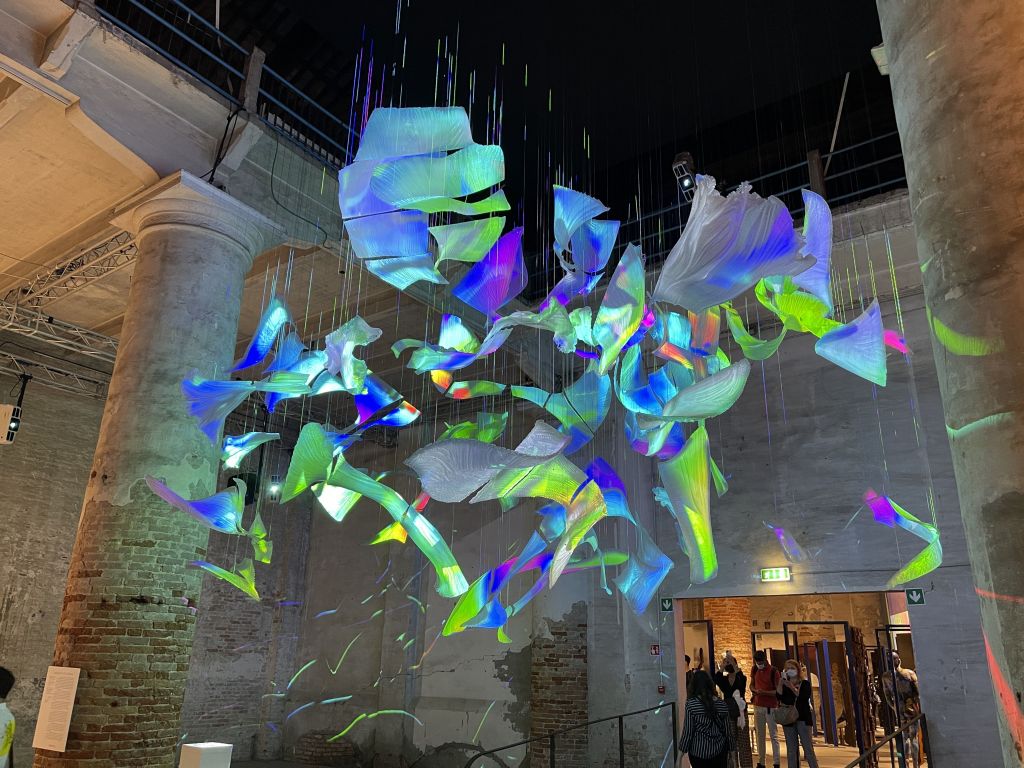 Right at the entrance to the Arsenale, a dazzling mobile fascinates. Photo: Werner Mäder, Uetikon

The curator of the 17th International Architecture Exhibition and architect Hashim Sarkis decodes the thematic question of how we will live together like this:

Architecture as a response to current changes 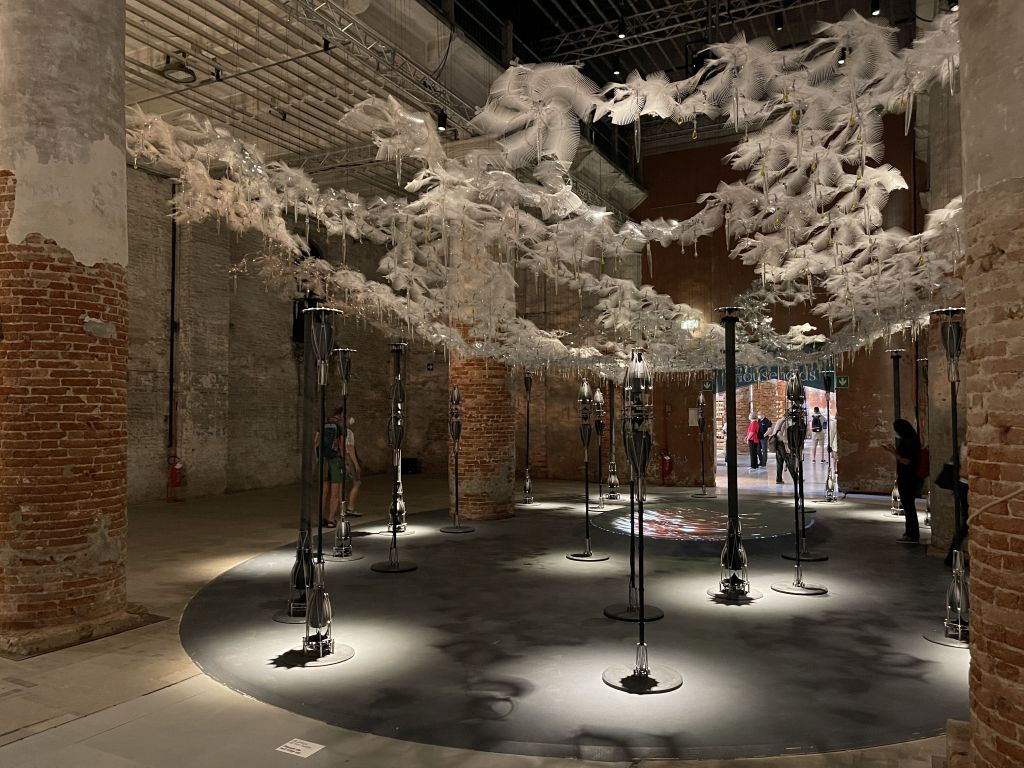 In his statement on the exhibition’s motto, curator Hashim Sarkis writes: «It is indeed as much a social and political question as a spatial one. More recently, rapidly changing social norms, the political polarization between left and right, climate change, and the growing gap between labor and capital are making this question more urgently relevant and at different scales than before. In parallel, the weakness of the political models being proposed today compels us to put space first and, perhaps like Aristotle, look at the way architecture shapes inhabitation in order to imagine potential models for how we could live together.» OPAFORM architects; How will we live together?, 2020; Photo: Werner Mäder, Uetikon

In his detailed and richly illustrated online article by baunetz id, the author Norman Kielmann writes on the theme of the Biennale under the title “Mad Max meets Jungle Book”: “Asking questions is suddenly more important than giving answers. To analyse the present, we look to the future.”

And further: “Especially in the Arsenale, the screen is stretched wide open. You see robots constructing buildings and landscapes. Humans have been transformed into cyborgs. Alien-like beings are bred in water-filled glass cylinders. The world is in a post-apocalyptic state. And yet the people don’t let it get them down. They hold boisterous dinner rounds together with other hybrid beings at large oak tables, as in the work Refuge for Resurgence by Anab Jain, Jon Ardern and Sebastian Tiew from the London design studio Superflux. The plates and cutlery are assembled from natural objects and artefacts. Mad Max meets Jungle Book.”

Cooperation in the sense of “together” is fascinating. 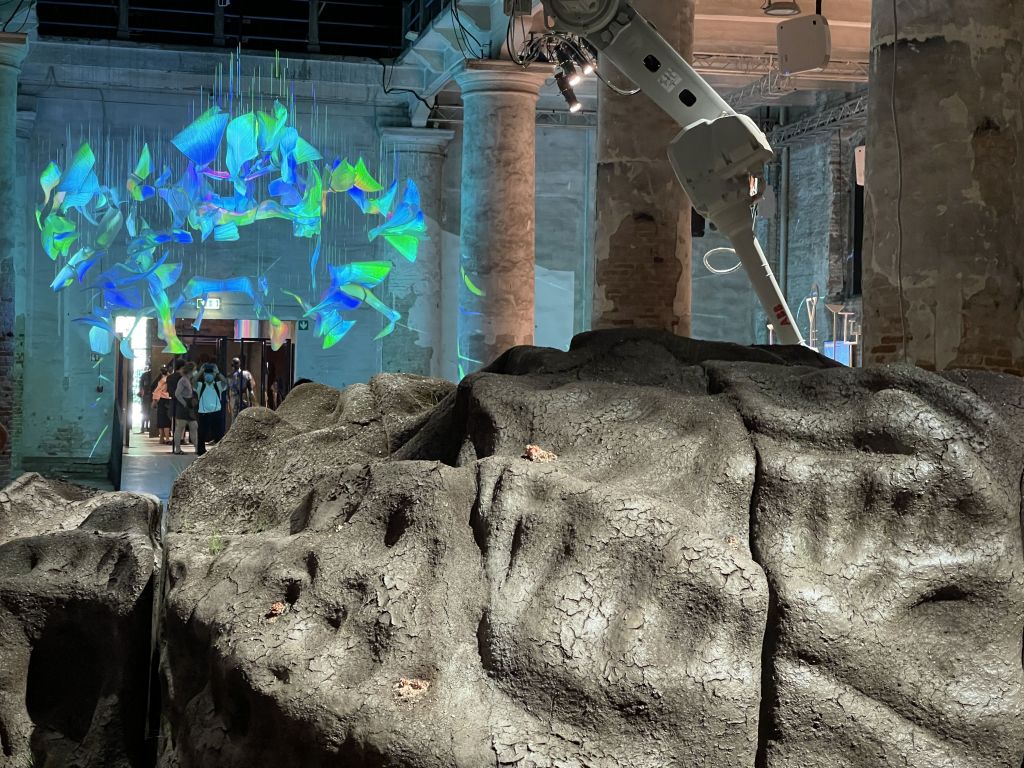 It was certainly impressive to see how the participants of the Architettura 2021 Biennale worked together with other professions and professional groups – with artists, builders, engineers and craftsmen, but also with politicians, journalists, social scientists and ordinary citizens. It thus underlines the important role of the architect as a mediator and at the same time argues that architecture, in its material, spatial and cultural specificity, inspires the way we live together.

The Biennale leaves behind mixed feelings 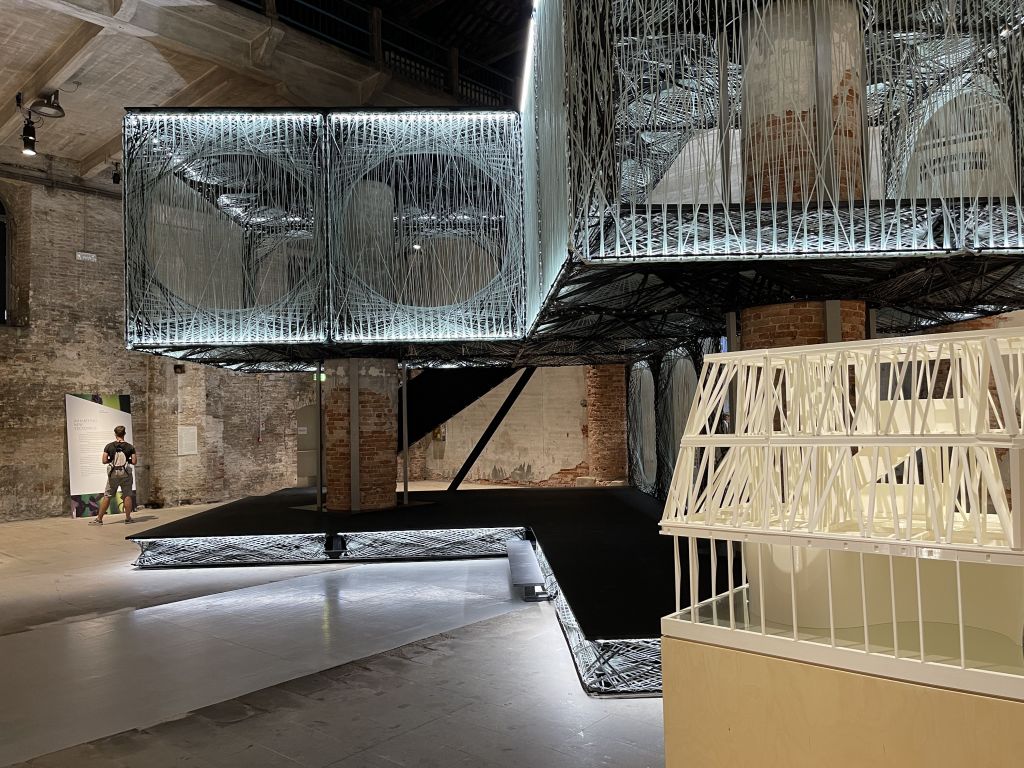 Wandering through the – ironically military – historic halls of the Arsenale (the name stands for the former shipyard, armoury and naval base of the former Republic of Italy), one feels more like being in an art exhibition than an architectural one. This is not a negative thing, because what is on display here is partly of high design quality and definitely thought-provoking. Symbols for the affluent society – deterrent and aesthetic at the same time; Photo: Werner Mäder, Uetikon

The projects range from the analytical to the conceptual, the experimental, the tried and tested to the widely known. The five thematic areas are 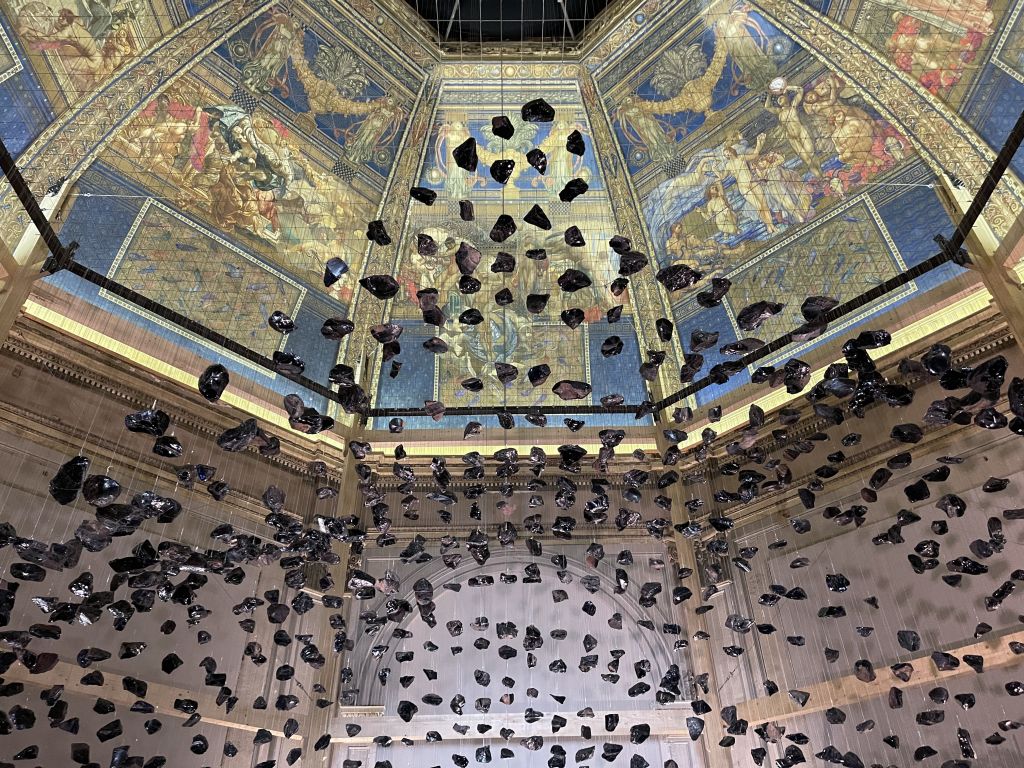 While walking through the large halls and the numerous exhibits, these themes did not always open up to us intellectually, despite the often fascinating realisation. For a somewhat easier understanding of the relationship to the theme, we would have appreciated somewhat more detailed explanations of the works in some cases, but in other cases these might have limited our own imagination.

As always, a large number of nations present themselves in the Giardini of the Biennale in their respective national pavilions or with their own contributions. This year there were a total of 63 nations. 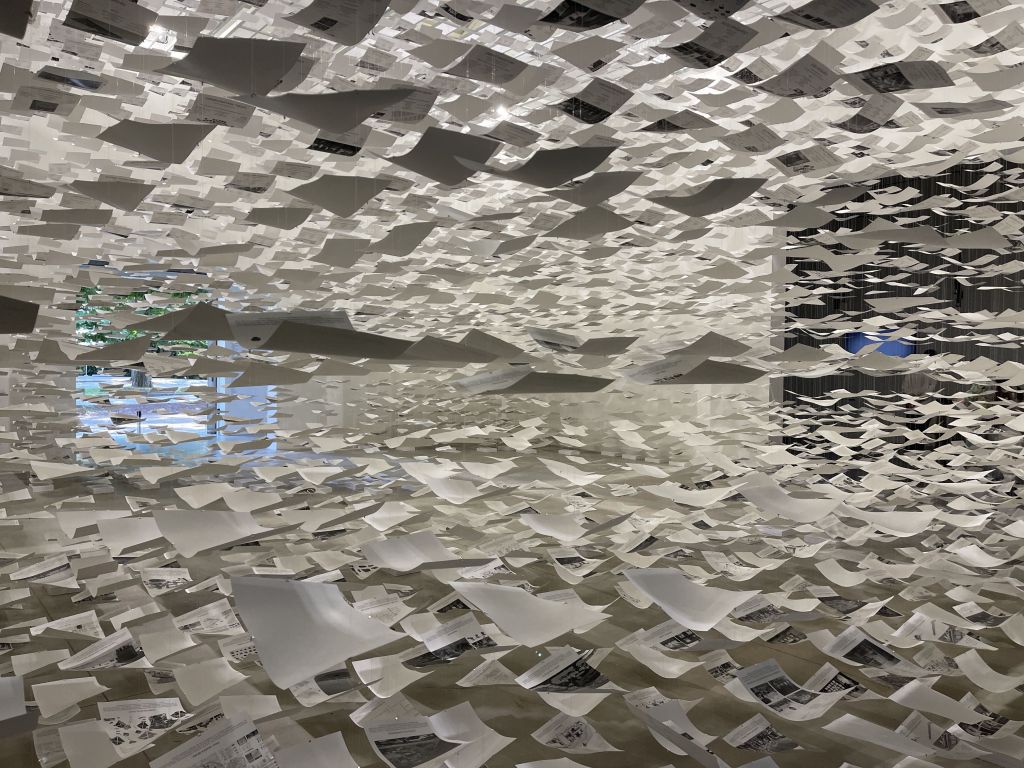 Here, with a very sensitive installation of thousands of leaflets, each with a project by a Spanish architect, the Spaniards spoke to us very intuitively and showed how diverse the ideas of architecture can be about living together in the future. 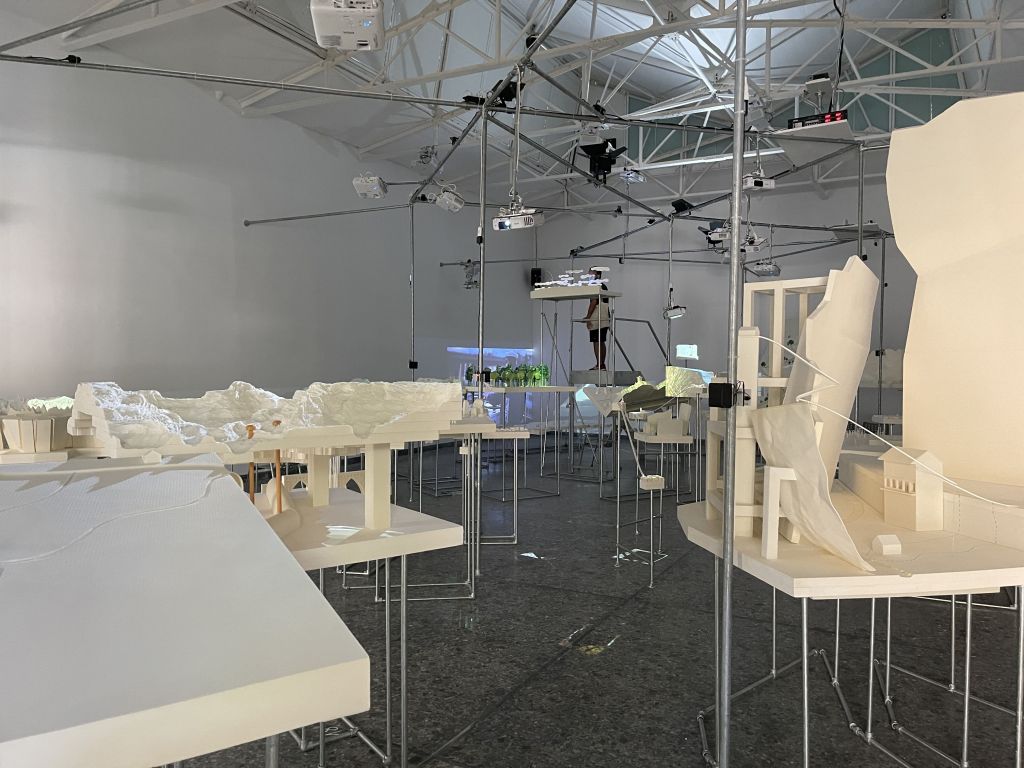 For Switzerland, Pro Helvetia tried to make life near the Swiss border a visual and intellectual experience with its project “Orae – Experiences on the Border”. We were also inspired to think about living together and everyday life by the small but nice exhibition in the Chile Pavilion. Here, Chilean curators have transformed 500 testimonies – small narrated histories from people’s everyday lives – into 500 paintings. Based on a set of formal rules and collective work diluting authorship in the neighbourhood community, painters and historians have gathered the stories of the emblematic José Maria Caro settlement and transformed them into paintings. These latter go through different spaces, recalling past and present lives within this community. 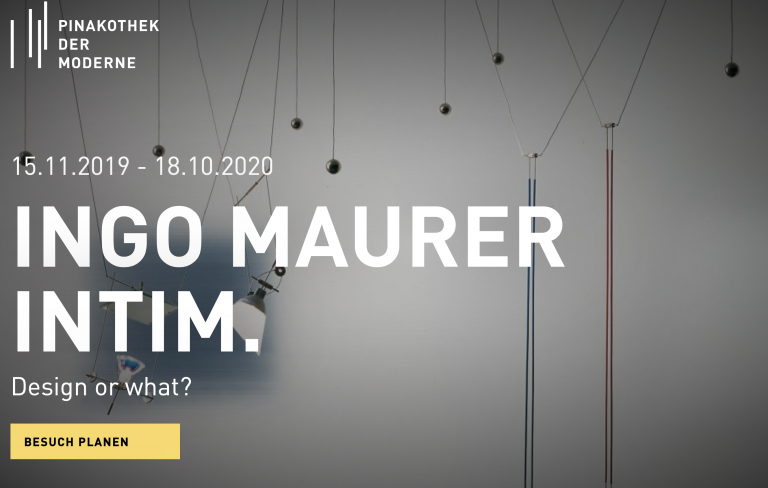 Ingo Maurer – an artist of light.

Munich’s Pinakothek der Moderne is dedicating an exhibition worth seeing to the artist of light Ingo Maurer, with more than 80 objects, models and photographs ranging from early designs to current lighting fixtures. Learn more about six great estates with royal provenance—a grand collection of homes whose residents and guests have ranged from William of Orange to HRH the Princess Margaret and Diana Princess of Wales. These and similar luxurious properties are for sale at Christie’s International Real Estate. Seven of the world’s greenest cities.

What does it take to be a truly green city today? Is it simply the effective use of natural and renewable energies? Or is it more about providing outdoor green space for residents? And how about transportation?