The Fondation Beyeler is showing impressive paintings by Georgia O’Keeffe.

Have you ever heard of Georgia O’Keeffe? If so, then you know what to expect and you should take the opportunity to visit this comprehensive exhibition of her work at the Fondation Beyeler. If not, you now have the opportunity to get to know one of the most important painters and icons of modern American art (1887-1986). 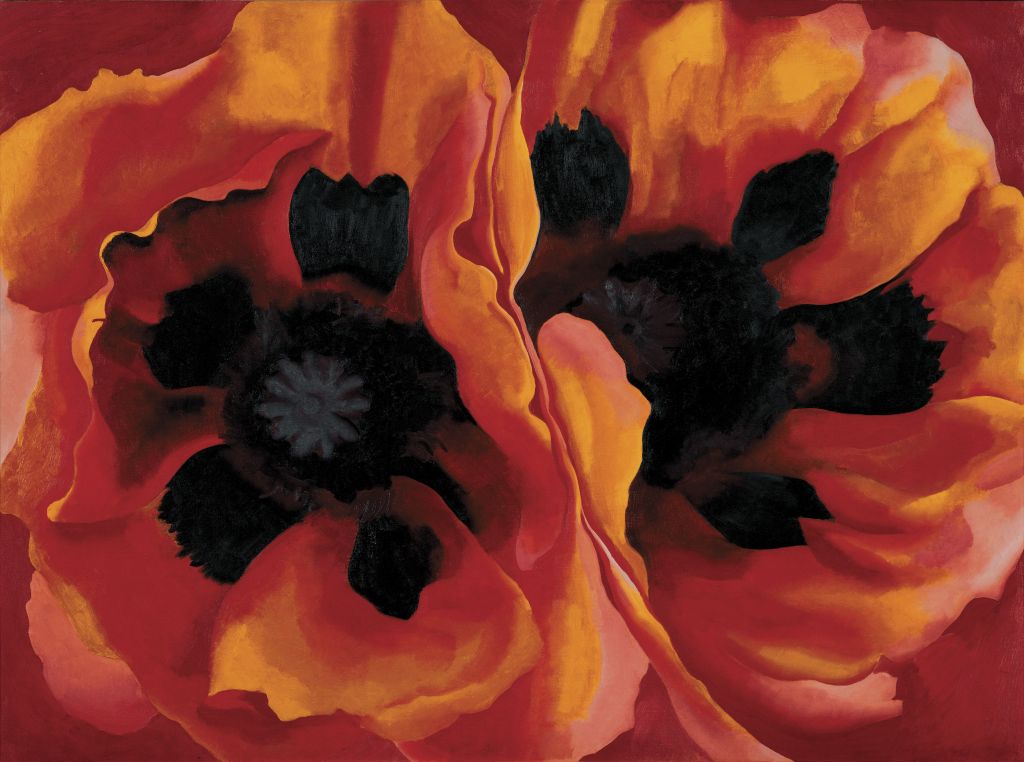 With 85 works from public and private collections, primarily from the USA, the exhibition offers a representative insight into the work of this extraordinary artist, which is as diverse as it is surprising. The retrospective is a rare opportunity for the European public to discover Georgia O’Keeffe’s work in such depth, which is rarely represented in collections outside the USA.

O’Keeffe translates what is perceived into new images of reality

The exhibition at the Fondation Beyeler focuses on the special way O’Keeffe looked at her surroundings and how she translated what she perceived into entirely new images of reality – sometimes almost abstract, sometimes close to nature. “You rarely take the time to really see a flower. I have painted it large enough for others to see what I see.” This quote from 1926 can be used as a guideline for considering O’Keeffe’s art and life.

O’Keeffe developed an individual pictorial language that oscillates between abstraction and figuration and is still characterised by its extraordinary relevance today. The artist’s very own view combined with her careful and respectful approach to nature make Georgia O’Keeffe the most important and interesting painter of landscape and nature in the 20th century.

Georgia O’Keeffe spent decisive years of her artistic development from 1918 onwards in the metropolis of New York, at the centre of the then fashionable and highly influential small circle around Alfred Stieglitz, the photographer, gallerist and mediator in whose gallery not only the avant-garde of Europe was shown and discussed at a very early stage, but where, in response, a new young American art and photography was propagated and promoted.

O’Keeffe owed her early recognition and subsequent career to the support of Stieglitz, her later husband, and decades of association with the New York art scene. But in terms of her art, the urban life of the big city left few discernible traces.

From early works from her homeland to New York and her last years in New Mexico.

The exhibition begins with a look at O’Keeffe’s early works, which were created while she was teaching in Virginia and Texas. Charcoal drawings are shown alongside a selection of small-format watercolours that exude intense colour and luminosity. Red Landscape is one of the few oil paintings from this period.

Subsequent works reveal the artist’s preoccupation with abstraction. In principle, however, the juxtaposition of representational and abstract painting was a major feature of O’Keeffe’s work. 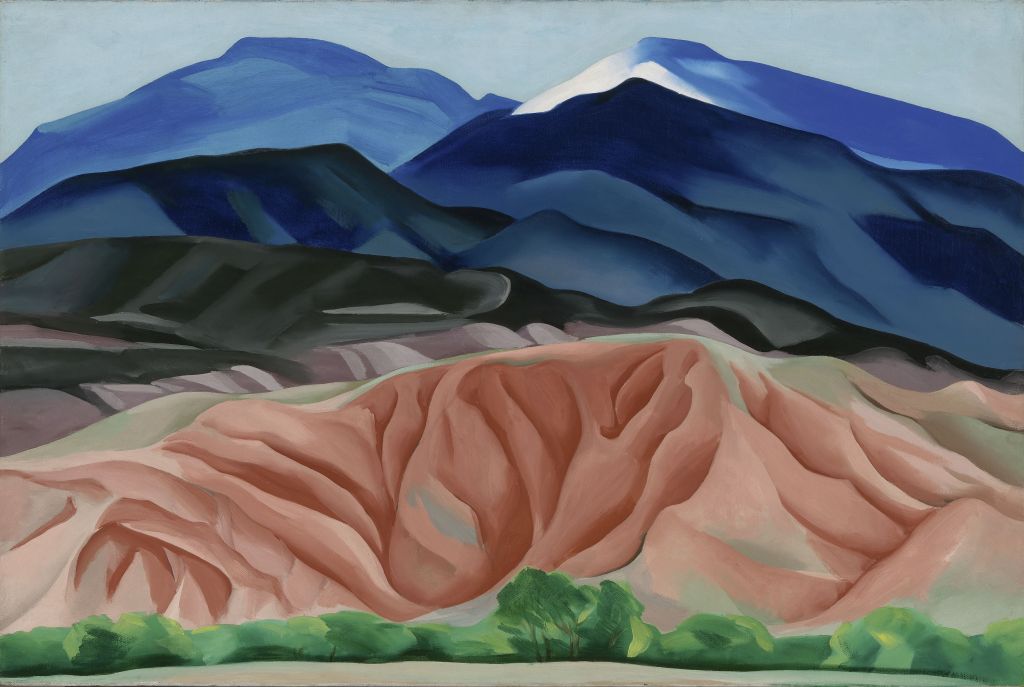 The plant world, especially flowers, served as central motifs in O’Keeffe’s work. O’Keeffe’s preoccupation with the then current trend of “straight photography” can be seen in her large-format flower paintings.

O’Keeffe’s main sources of inspiration were nature and landscape; she painted both figurative works and abstractions based on landscape motifs, first at Lake George and later in New Mexico. The works from the period of her first stay in New Mexico drew their inspiration from the manifestations typical of the region, such as adobe architecture or the bucket crosses of a religious lay brotherhood erected in the middle of the landscape. Mule’s Skull with Pink Poinsettias, 1936, one of O’Keeffe’s famous paintings of the animal skulls she found in the desert, was also created during this period. 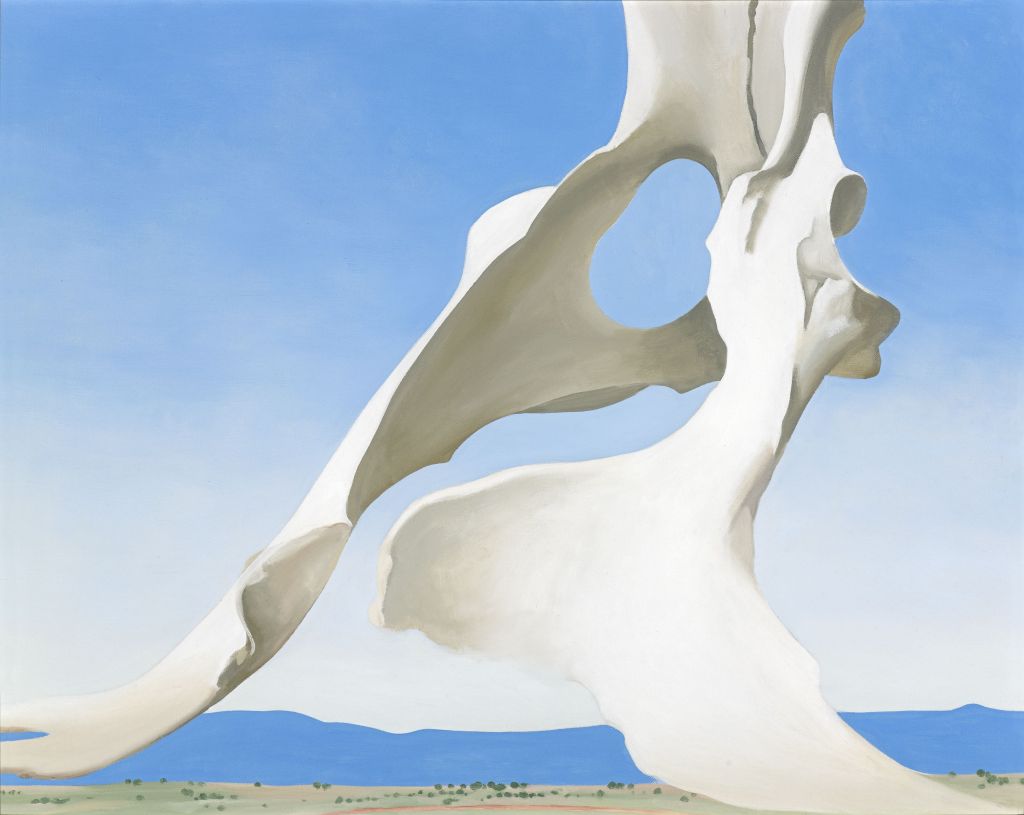 During the war years, when O’Keeffe lived permanently in New Mexico, her view of this landscape changed. In her two series of works Black Place I-IV, 1944, and Black Place I-III, 1945, she rendered the grey-black hilly landscape in an unfamiliar dark palette, painting it increasingly abstractly and from a bird’s-eye view. The still life It Was a Man and a Pot from 1942 also suggests that O’Keeffe’s perception of her surroundings changed in the 1940s under the impact of the war.

In the last room of the exhibition, the Fondation Beyeler shows O’Keeffe’s late work.

More about the artist Georgia O’Keeffe

O’Keeffe grew up on her parents’ dairy farm in Wisconsin, in the Midwest of the USA. She took her decisive artistic steps when she lived first in Charlottesville, Virginia, and then in Canyon, Texas, where she held a position as an art teacher from 1916 to 1918. Even after moving to New York, the rhythm of her life as an artist was determined by the change to often recurring places. For many years, it was summer stays at the Stieglitz family’s holiday home on Lake George in New York State where much of her work began. In 1929, O’Keeffe travelled for the first time for several weeks to New Mexico in the south-west of the USA, where she returned every year, always alone, and where she finally settled after Stieglitz’s death.Georgia

In the USA O’Keeffe was already  during her lifetime regarded as an important representative and co-founder of the new American art, as it had been propagated since the late 1910s alongside and in opposition to the European avant-garde. In 1943, the Art Institute of Chicago held her first retrospective in a museum; in 1946, the Museum of Modern Art, New York, organised a major exhibition, the first show of the work of a woman artist in this institution.

Her first major exhibition in Europe was held in 1993 at the Hayward Gallery in London. One of the few exhibitions in the years that followed, and the first in Switzerland, was the 2003 retrospective curated by Bice Curiger at the Kunsthaus Zürich. Today, Georgia O’Keeffe is also a famous artist in Europe, although her works are rarely seen in their original form. 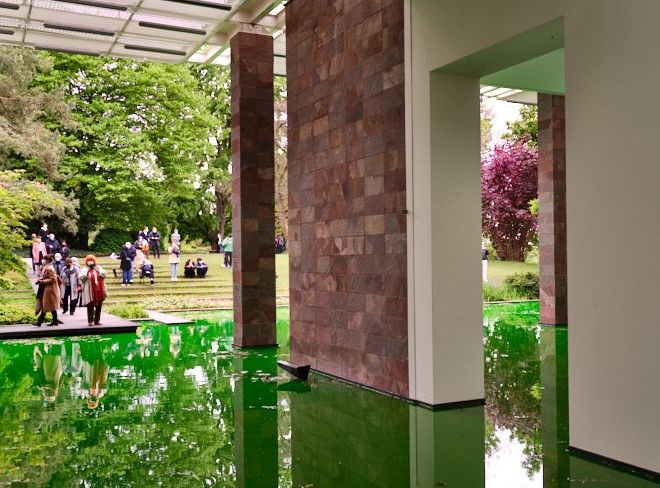 The Fondation Beyeler is going all green.

Sometimes it takes so little to completely change the perception of a building and create entirely new references to the surrounding landscape. An unconventional work of art in and around the Museum Beyeler makes this clear. 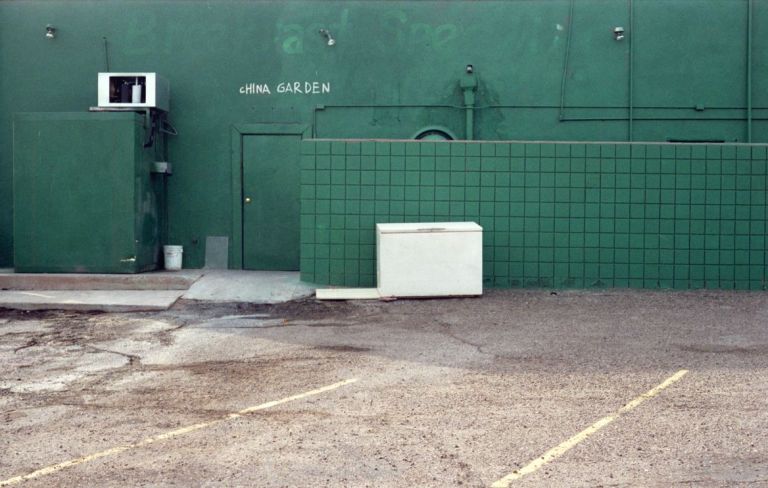 Autumn is slowly approaching and with it comes the time of the design and art fairs. The photo basel (from 21 to 26 September) and the Art Basel (from 20 to 23 September for invited guests only and from 24 to 26 September for the general public) have just opened. And already BLICKFANG announces its fairs in Basel from 1 to 3 October and in Zurich from 19 to 21 November in the newly opened Kongresshaus.